July 13: Read about Louisville's Peacemaker of the Year 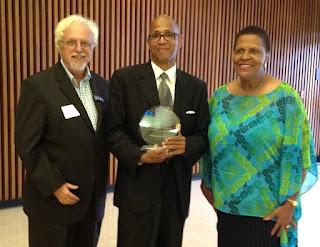 The award was presented at IPP's third annual "My Recipe for Peace" dinner which was held at The Temple (Congregation Adath Israel Brith Sholom) on Thursday night, July 12, 2012. In making the presentation, Terry Taylor, Executive Director of Interfaith Paths to Peace, cited the work of Christopher 2x in dealing with violent crime in the streets, his service to the families of both victims and perpetrators, and his efforts to bring the families of victims and perpetrators together to heal the emotional and spiritual wounds they share.


Christopher 2X is head of the Fight Crimes Against Children Partnership, a group that advocates for fighting crimes against young people and raising awareness around child safety issues. He works closely with community groups, law enforcement and religious leaders to address the problem of violence in the streets of Louisville, to heal the emotional and spiritual wounds suffered by those affected by violence, and to find ways to reduce and eliminate violence in our community.

Richard attended Guilford College where he majored in English and minored in music. Following his graduation he was drawn to the field of education and more particularly to working with children. Richard taught at Cone Elementary School in Greensboro, North Carolina, where most of the students he served were African Americans who faced enormous economic challenges. He empowered these youngsters by his example. Together they shared kindness, mutual respect, and joy.

Richard died in 2009 at the age of 31 after a brief but intense life devoted to peacemaking. His life serves as a powerful model of what each of us can accomplish when we strive to be fully human. Richard made it his life’s work to expand the flow of love in the world by reaching out to others, striving always to help those less fortunate than him. He did not judge anyone; nor did he exclude any from the wide circle of his care. His peacemaking efforts reached individuals of many races and religions, both in his native land and in countries as far away as India.  His loving kindness deeply touched members of his own family. That same loving kindness eased the pain of the ordinary and often forgotten men, women and children whose lives are difficult and who often just need a friend.

About Interfaith Paths to Peace

Interfaith Paths to Peace (IPP) is a nonprofit organization based in Louisville, Kentucky.  IPP works to make our community, the nation, and the world more peaceful by bringing people of different religions together through programs and events that promote inter-religious understanding. IPP now delivers more interfaith events and opportunities than any other group in the Midwest and perhaps in the US.
Here is a link to more information about Interfaith Paths to Peace:
http://paths2peace.org/main/summary

Text of Terry Taylor's Remarks in Presenting the Award to Mr. 2X on July 12.

It is now time for us to present a very special award to someone in our community.

It is called the Louisville Peacemaker of the Year award, and honors the individual or organization that Interfaith Paths to Peace believes has made the greatest contribution to peacemaking in our community—especially peacemaking in an interfaith context.

The award bears the name of the late Richard Hunt Smith, a young man who devoted his sadly shortened life to bringing peace to the people around him. Richard was a special kind of “first responder.” He was a person who offered solace to the men, women and children he encountered in his day-to-day life who were emotionally and spiritually wounded by their tragic circumstances.

Tonight we honor a Louisville citizen who is also a special kind of first responder.

Almost every day we turn on the news and see images of sites in our city where violence has ended a life. In these pictures we often see and hear from first responders—police and emt’s who are dealing with the physical and criminal aftermath of a shooting, a stabbing or some other act of deadly force.

But when we see those stories on TV we almost always see another kind of first responder.

No matter where in the city a deadly crime has occurred, he is there, offering healing words.

He is there offering solace without regard to the race, religion, or culture of those he serves.

He often persuades alleged perpetrators to turn themselves in to authorities to face the process of justice.

He takes direct action with young people to encourage them to solve their problems non-violently.

And perhaps most movingly, in the wake of deadly violence, he works to bring together the families of the victims and the families of the perpetrators in an effort to mend broken hearts and to make sense out of situations that are seemingly senseless.

Posted by Terry Taylor & Spirituality U. at 6:24 AM